What Efficiency Means to a Film Composer

How does a concept like efficiency tie in to composing music for a film? Writing music is a creative pursuit, and for most composers, the more time they can spend in that creative zone, the better the final product will be.

Being efficient in this context means maximizing your time in the creative stages of the project, and minimizing your time on things like logistics and technical issues. Having a well-designed music composing workflow is the key.

Another consideration when it comes to efficiency is the demands of the production. Simply put, when writing for a film, the composer is part of a larger effort, with all the budget constraints and deadlines that come with making a movie. You are a part of a greater project, an essential cog in the machine. The more efficient you can be, the smoother and faster the overall machine will run.

So, efficiency has two components: maximizing creativity, and maximizing value. Let’s look at a workflow designed to do both.

Here is the workflow I have developed to help me be efficient, no matter the scope of the project. It’s flexible and applicable in every situation I can think of:

This is where it all starts, and something most people do in their day-to-day life without being aware of it – drawing from the world around them to find inspiration for music. Inspiration can come in many forms, and each composer will draw from different sources.

This could be other film scores, classical music, or a unique instrument overheard on the street. It also doesn’t have to be music – it could be birdsong, the rhythmic humming of a machine, or neighbors shouting at each other. Other mediums like visual art and dance can spark creative ideas too, suggesting a certain tone or texture.

Leave a comment below with your favorite source of inspiration

Whatever the source, a good strategy for turning experiences into inspiration is to keep a journal of things that spark ideas or strike an emotional chord. The more these things are noted and catalogued, the more inspiration will seem to be everywhere. Composers can then reference this journal when seeking ideas for a new film score.

Traditional film scoring workflows will call for filling out a Cue Sheet to keep track of every piece of music (cue) that will be added to the film. It is typically created in a Spotting Session, where the composer watches an edit of the film and decides where to add music.

The efficient workflow calls for a cue sheet on steroids: the Attack Plan. It’s a spreadsheet that, like a cue sheet, will list every piece of music needed, along with timing details. But it also has so much more.

In addition to the normal metadata for each piece of music, it also contains notes for the different story beats and emotional arcs of the film. Using a color-coding system, it lets you look at a specific cue and immediately know what is important to the story in that moment. It’s an extra layer that provides you with a shorthand for critical information that will inform your music, and maximizes your creative efficiency later in the process.

Check out this video where I show how to craft an Attack Plan for a short film (coming soon!)

Unlike a standard cue sheet, the Attack Plan can be started when the composer has the script in hand – before a single frame of footage has been shot.  This saves time and money for the production later on, creating more efficiency.

Just like a director casts the actors for their film, the composer must decide which instruments, or voices, will be featured in the score. The goal of this step is to build a core ensemble of voices that will be the foundation for every cue.

Check out my video where I walk through finding the right voices for a film (coming soon!)

For many traditional film scores, this would be an orchestra, maybe embellished with a few unique instruments. For an indie film composer, this may be a smaller ensemble. If the film calls for it, this could be a rock band, solo piano, or seventeen accordions.

The major advantage for composers today is that these voices do not have to exist in the real world – they could be entirely virtual instruments. Every major DAW will support synths, samplers, and instrument plugins. The only limit on what voices to compose for is what you can imagine. You can even have your full orchestra on an indie budget – there are many high-quality virtual orchestra plugins available for purchase.

Read about building out your music studio at any budget here 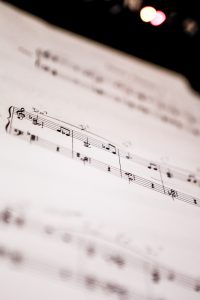 In this step, the music begins to take shape. Working in a master sketchbook project, the efficient composer will start to write melody lines, build interesting textures, and put their initial ideas down on (digital) paper.

The Attack Plan should inform the ideas being penned here. For example, if one of the planned cues needs some sort of building suspense, sketch out a rough idea for that key moment. Then craft some different variations, playing with the idea to try out different versions.

Similarly, if a character theme is referenced in many cues, that can be developed in the sketchbook. Whether it’s a short melodic phrase or a fully fleshed-out idea, this is the place to sketch is out.

Read my eBook for more insight into the nuts and bolts of this important step (coming soon!)

Timing doesn’t matter at this point, and in the sketchbook, there is no such thing as a bad idea. Everything should be saved for later reference, if needed.

The goal is to spend time here in that creative zone, capturing the raw ideas and developing a musical landscape for the film.

When thinking about composing for a film, this step is probably the first that comes to mind – actually sitting down with the scene playing on screen, writing music with specific timings for that specific scene. And, of course, this is a critical step in the process.

But in the efficient workflow, this is the fifth step!

All of the preceding steps laid the groundwork for this stage of the score:

With all this in place, writing for picture becomes a more efficient step in the process. For some cues, it may be as simple as tweaking the tempo of a sketched-out idea. Others may require more work, but all will be building from previous foundational steps. 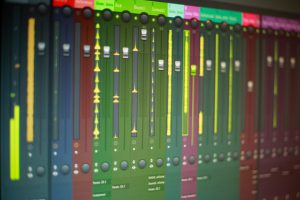 Mixing brings together all the voices into a cohesive whole, and offers ways to emphasize parts of the score at important story beats. This may be a step not normally handled by the composer, but in the DIY or independent film world, the task often falls on them.

This necessary step can often bog the workflow down in technical details, but it doesn’t have to. If complimentary voices were chosen in step three, the ensemble may already sound great without many tweaks.

Work done earlier will make you more efficient in the mixing stage.

Creatively, mixing can be used to bring elements of the score into focus for the audience. For example, a voice that is identified with a character may cut through the mix at a key character beat, or the ominous bassline may be brought to the fore during a suspenseful moment.

A necessary, but often dreaded step in the workflow.  Showing the score to the director and getting their approval can be a frustrating process. It means going back and making changes (sometimes major changes) to the music.

The key to maximizing efficiency in this step – and for staying sane – is to think of this as an opportunity for collaboration with the director. They will have many creative ideas of their own, and ultimately want to make the best film they possibly can.

If the composer approaches receiving feedback with a collaborative mindset, revisions will go more smoothly than if they are combative with the director. This usually translates into getting final approvals on cues more quickly.

This is the step in which all of the composer’s hard work comes together. To avoid confusion, the composer should communicate clearly with the editor or music editor in order to give them exactly what they need to finish the movie (tech specs will vary from project to project).

Delivery also encompasses screening and premiering the final film, which is usually the most enjoyable part of the process. Hearing your music play on the big screen while watching audience reaction is richly rewarding for any composer, and makes the long journey worth the effort.

Putting it all together

Looking at the workflow, the first four steps can be completed before a single frame of footage has been shot. This puts the composer in an extremely strong position when edits start coming in.

Getting out ahead of the curve early is great for deadlines, but it also is great for the creative process. Starting early on the score with just the script in hand leaves the composer free to spend as much time as they like on playing with voices and, more importantly, sketching out musical ideas.

Spending as much time as possible working in the master sketchbook  should be a major goal in the workflow, because that’s where musical ideas take shape.

Steps five through eight are flexible, and every cue will probably be in a different step at any given time. This allows cues to be delivered as they are finished, getting music into the hands of the editor faster.

A well-crafted workflow is important to prepare the composer for success, and keep them on track when writing a score.  Feel free to tweak and change this workflow to meet your needs and working style. But, keep efficiency in mind to make your music better, and the film more successful.

For further reading on the workflow and all the steps outlined here, I recommend reading my eBook, “Film Composing 101” (coming soon!)